Zhemgang is one of the richest Dzongkhags in Bhutan in terms of natural resources, culture and wildlife. With a population of 17,763 in eight gewogs, the Dzongkhag forms part of three national parks – Royal Manas National Park, Jigme Singye Wangchuck National Park, and Phrumshingla National Park – with a wildlife corridor passing right through it.
Historically, the district is known as Khengrig-Nam-Sum or three agro-ecological zones – Upper Kheng covering Bardo and Shingkhar with high altitude areas, Middle Kheng covering Nangkhor and Trong with middle altitude areas and Lower Kheng covering Phangkhar, Goshing, Nangla and Bjoka with mid-low altitude areas.

The people of Zhemgang cultivate mainly maize followed by rice, buckwheat, millet, barley, wheat, foxtail millet, potato, etc. Oranges are the main source of cash income for the southern and central regions while the northern region depend mainly on livestock products for source of income.
Zhemgang is considered to be one of the last bastions of ancient Bon (Animist) religious practices. The people are also well-known for their rich culture, particularly folk songs and dances, while their skill in bamboo and cane craft is second to none with products such as Bangchungs (matted bamboo bowls),
Palangs (alcohol containers), Balaks (hats), mats and boxes being sold all over Bhutan and beyond. They are also adept potters and their earthenware products were highly prized throughout the country in the past.

The Dzongkhag is also filled with religious structures, both ancient and modern. The famous ones such as Buli Lhakhang and Tharpa Choeling Lhakhang were built by Terton Pema Lingpa, a famous revealer of the religious treasures of Guru Rinpoche.
The Manas National Park is considered a conservation showpiece with biodiversity that includes hundreds of rare animal and plant species such as Golden Langurs and the Asian One-horned Rhinoceros. It is the only nature park in the world where five cat species – tiger, leopard, jungle cat, fishing cat and more, are found sharing the same habitat.

Efforts are being made to identify suitable sites for eco-camps, eco-lodges, bird watching sites and conduct feasibility assessment of home stays in the selected villages to ensure that the benefits of tourism trickle down to the communities. 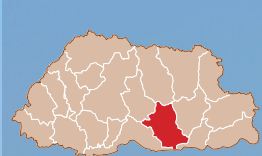 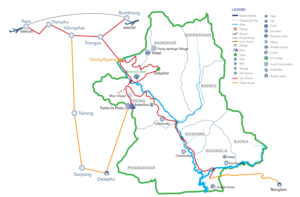